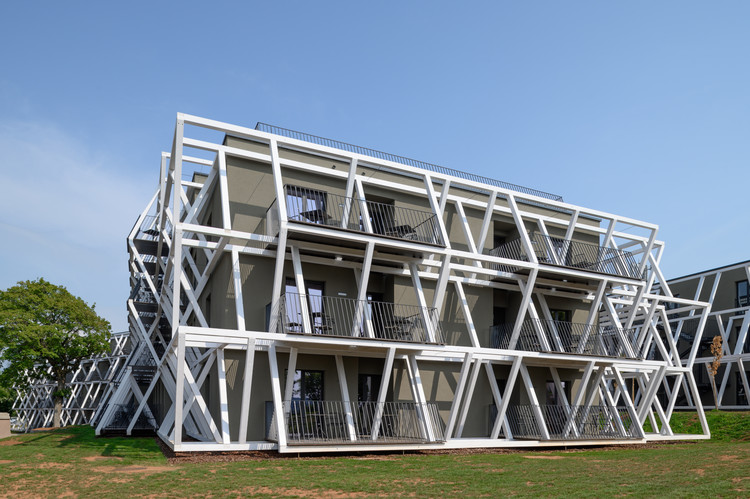 Text description provided by the architects. The Stud Farm Lipica is one of the most remarkable natural and cultural monuments in Slovenia. The area of cultivated karst landscape comprises laid-out pastures and meadow areas featuring protective fences, oak groves, and tree lanes. The historic built core of Lipica gained the appearance of a congruous whole in the early decades of the 17th century. Through the ages, it had continued to develop until large tourist accommodation buildings were built in the 1970s, as the exceptionality of Stud Farm Lipica piqued the interest of visitors from across the world.

Hotel Maestoso is the largest of all accommodation buildings in Lipica and it is the visitors’ primary contact with the stud farm environment. Its relatively aggressive appearance – due to the use of architectural elements of a certain period – poses a strong, even distracting contrast with the smoothness of the access paths used by the visitors to access the complex as a whole. The distinctive line of white fences which undulate among the green tree lanes and the rest of the upkeep natural landscape with the grazing herds of the celebrated white horses terminates rather ungraciously at the car park with the overbearing presence of the existing hotel building.

The fundamental guideline in designing the renovation and expansion of the hotel was to find a way to tone down the building’s presence in the space. The main consideration became the attempt at dematerializing the built masses. The proposed intervention proposes purging the hotel’s facade of all added architectural elements and unifying the structure’s expression by establishing a new, light load-bearing structure of the balconies.

The new structural membrane enveloping the entire hotel and swimming pool area establishes a sort of intermediate space between the buildings and the landscape. The interplay of light and shade breaks down the monolithic built masses and, together with the envisaged greening of the existing volume with climbing plants, dematerializes the building to the greatest extent possible and endows it with a distinctive and recognizable character.

The interiors of the renovated hotel and pool section are designed as a modern interpretation of the horse-stable interior spaces. As such, the public program is designed as a particularly flexible space, which may be adapted depending on a given need using the folding partition walls. The existing buildings are stripped to the raw concrete structure, which remains visible and acts as a suitable frame for the minimal additional interventions ensuring a warm expression of the interior space.

The use of materials that the visitors associate with the materials used in the stables combined with carefully designed lighting and small, movable pieces of furniture and decoration form a warm space, which becomes a logical enhancement to the complex’s unique program and location.